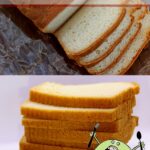 A couple of years ago, I posted a Soft Gluten Free Sandwich Bread Recipe that still gets a lot of attention. I hear from hundreds of people every month who love it & at least as many begging me to create a Vegan (egg free) version of it. It wasn’t until we discovered my son was also allergic to eggs that I started taking the Egg Free options very seriously.

So, I experimented with Chia Seeds, Flax Seeds, Psyllium Husks, Applesauce, Bananas, Egg Replacers, and several combinations of Baking Powders & Acids… But nothing I tried could truly duplicate a good loaf of bread. Discouraged, I set the idea aside for a while and stuck to making gluten free flatbreads & hot dog buns – Until Recently…

Remember my post a couple months ago about Aquafaba (aka Garbanzo Bean Brine) being used in place of eggs to make Meringue?? Well, I couldn’t shake the idea that I could use this somehow for bread, so I tried, and tweaked, and tried again… and it worked beautifully! I’ve made at least 20 batches with this recipe and it turns out soft & delicious every single time. So, now its time to share it with you! =)

The Tools & Ingredients in this Recipe: 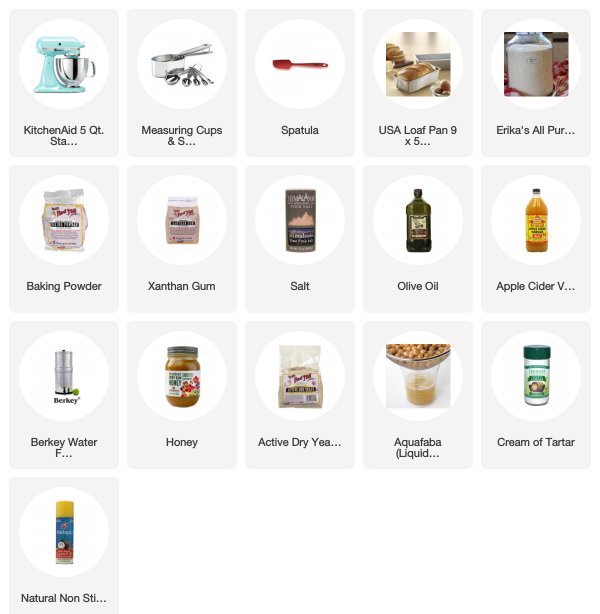 Aside from the added step of whipping the chickpea liquid to stiff peaks, this recipe is very similar to my other Gluten Free Bread Recipe with a couple of important tweaks… it’s important to follow the instructions carefully. I can’t say at this point how your substitutions will work.

PUTTING IT ALL TOGETHER:

I’ve tried my best to document the most important steps with some photos:

Proof your yeast – If you don’t have two separate Stand Mixer bowls, then do this in a large measuring cup. 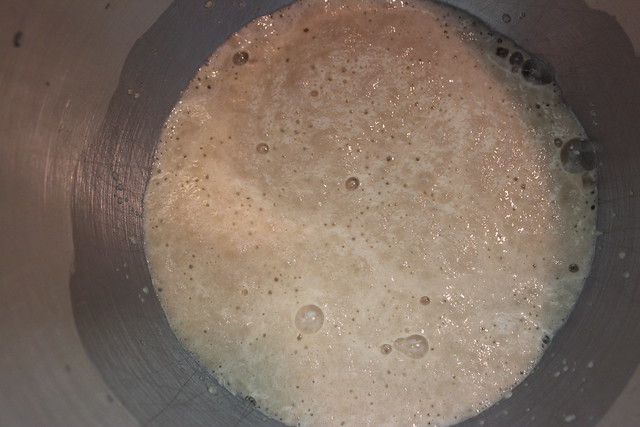 While your yeast is proofing, combine your Chickpea/Garbanzo Brine with Cream of Tartar & whisk in stand mixer bowl on high. 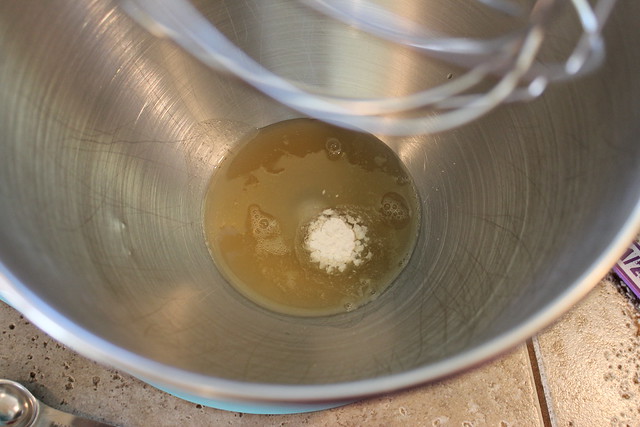 Mix on high until stiff peaks form (approximately 4-5 minutes when using a stand mixer). Set this aside for use later. 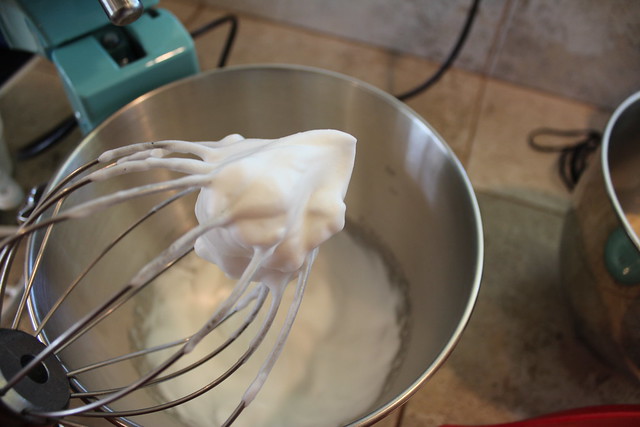 Whisk all of your dry ingredients together and add to your stand mixer bowl with the fully proofed yeast. (Don’t add the Garbanzo Brine Whip yet.) 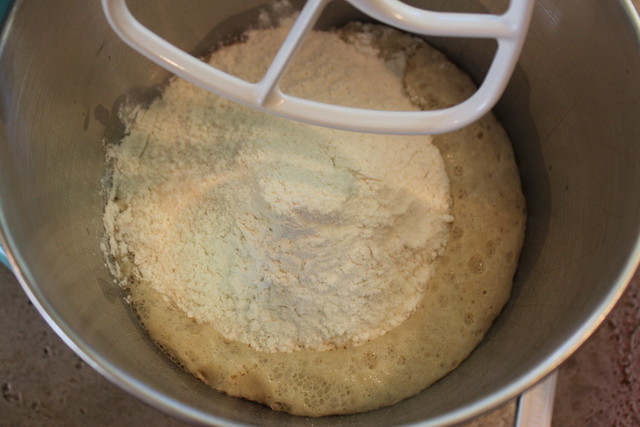 With paddle attachment, mix dry ingredients with yeast until wet, and with machine running on low, drizzle in Olive Oil. 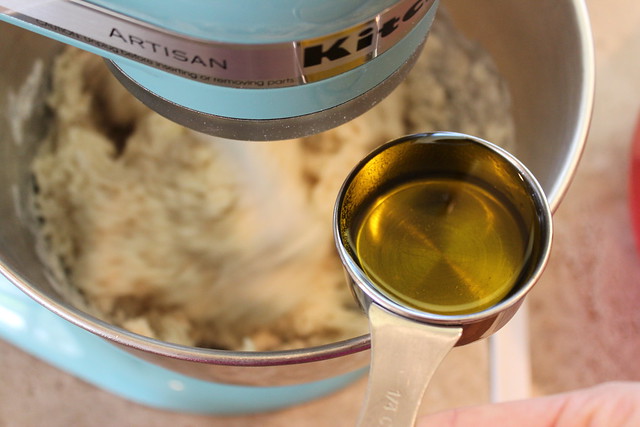 After adding the oil, drizzle in your Apple Cider Vinegar – then Beat mixture on High Setting for 2 minutes. 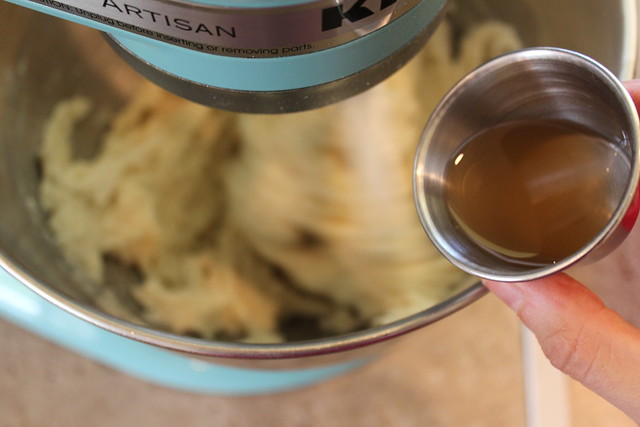 After mixing for 2 minutes, stop mixer and scrape in your garbanzo bean liquid whip (stiff peaks). 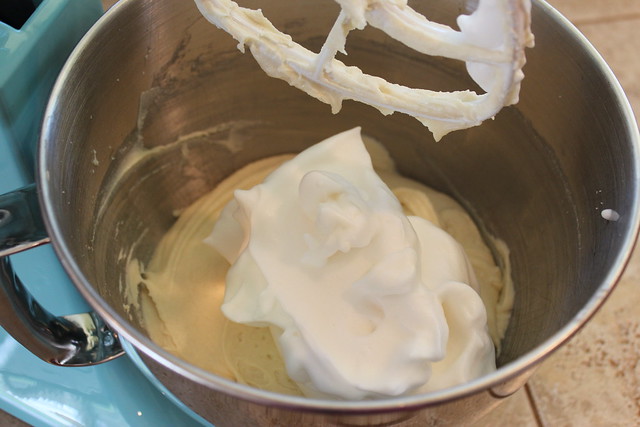 Turn mixer back on and mix at low speed until mixture is well incorporated (maybe 20 seconds or so) – But, do not over mix! 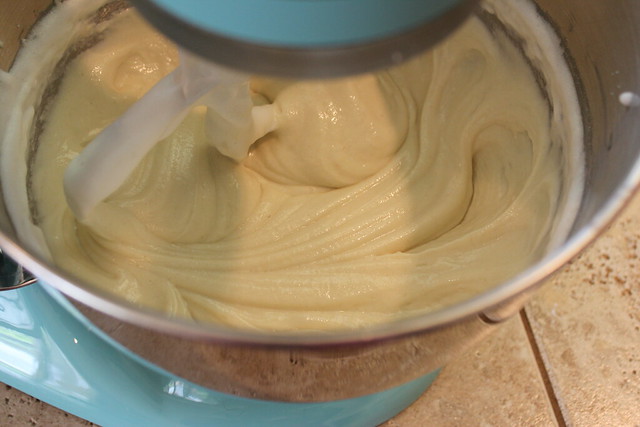 Pour bread mixture into your prepared loaf pan. See how the mixture is thick, but loose. It’s more like cake batter – it will be nothing like regular bread dough. 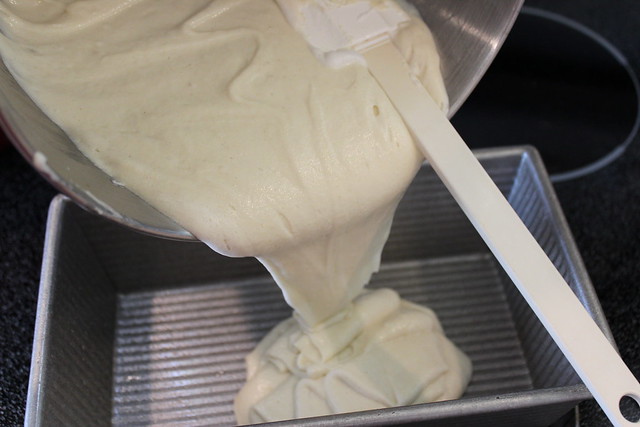 Smooth top of loaf and cover with plastic wrap. I place mine on my stovetop while the oven is pre-heating to 375 Degrees Fahrenheit. 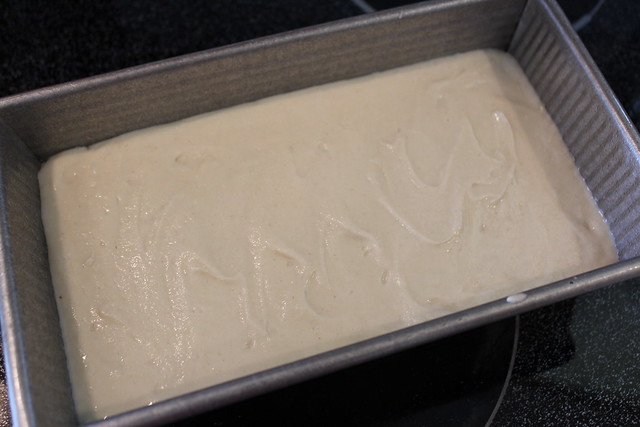 In my warm tropical climate, the loaf fully proofs in approx. 20-25 minutes. But whatever you do, please do not overproof your loaf – it will fall after baking. I just proof it until it almost touches the plastic wrap… Take note, that this will be the finished size of the loaf after it bakes – even if it rises in the oven. 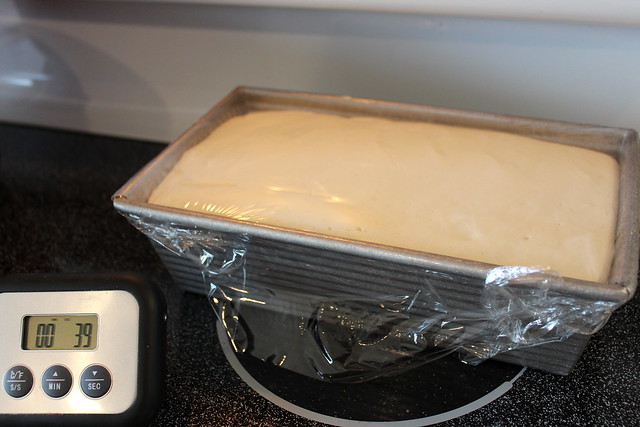 Here’s what it looks like after 10 minutes in the oven… see the little bit of rise? 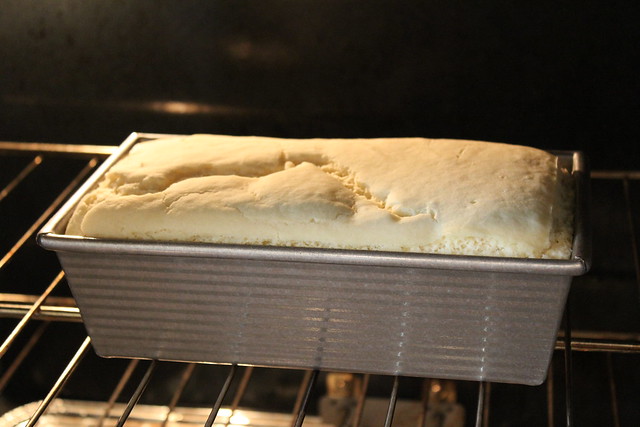 After 20 minutes in the oven – see how it shrinks back a bit? 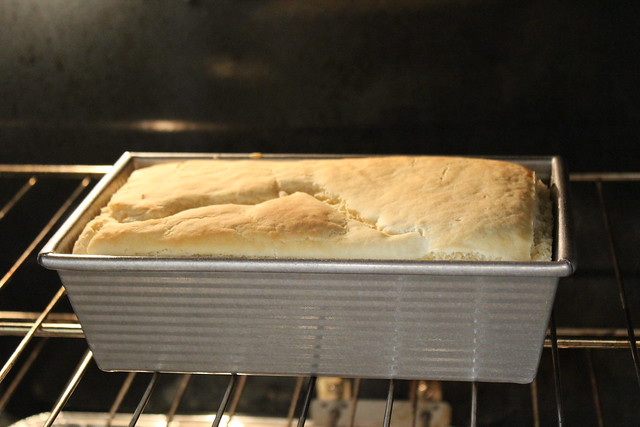 After 30 minutes in the oven. 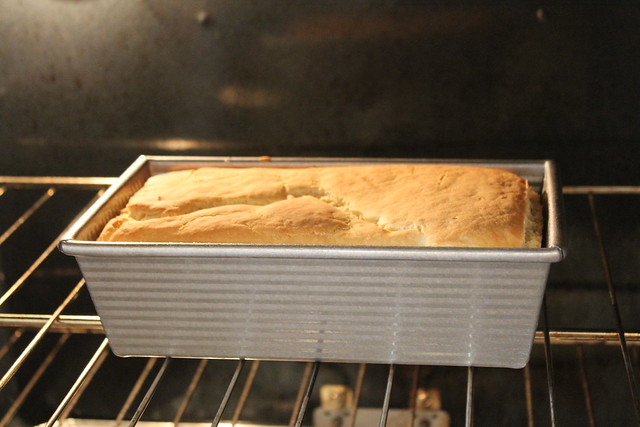 After 40 minutes in the oven… See how it’s back down to the size it was when you placed it in the oven after proofing? 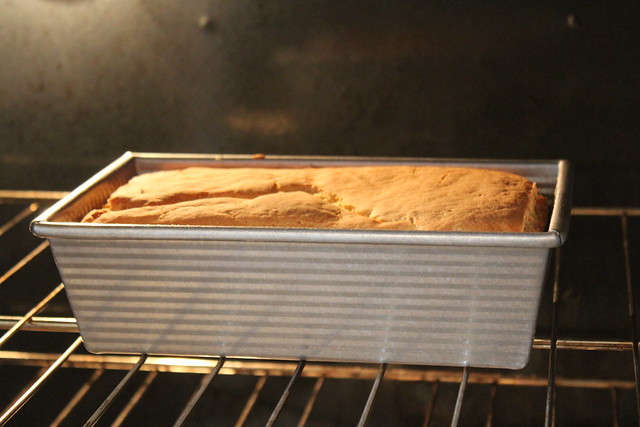 After 50 minutes in the oven. 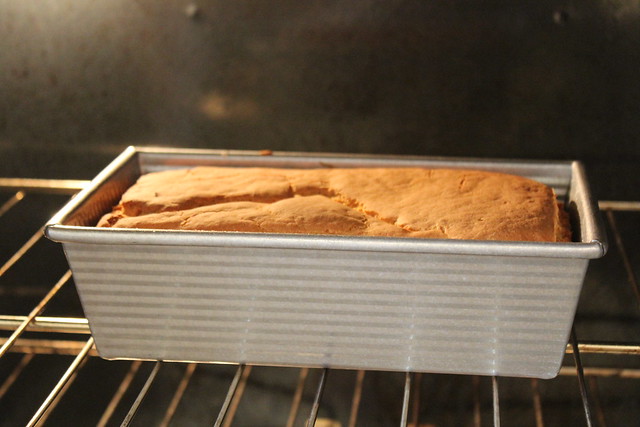 After approx. 60 minutes in the oven… The crust is nice and brown, and the temp just right at 212 degrees. 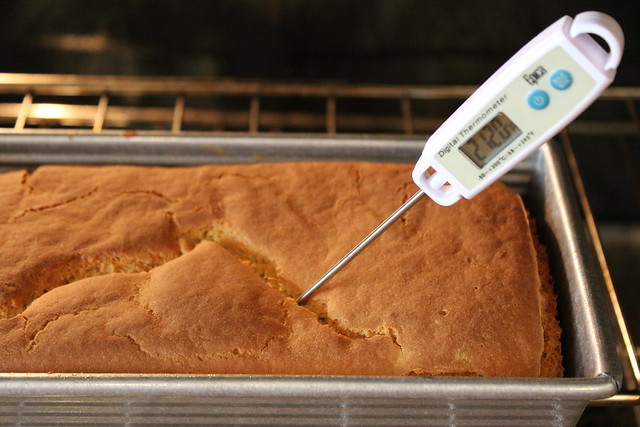 Once I pull it out of the oven, I like to cool the loaf on it’s side to avoid steam moisture making the bottom dense. It may be just me, but I think it cools faster this way too! =) 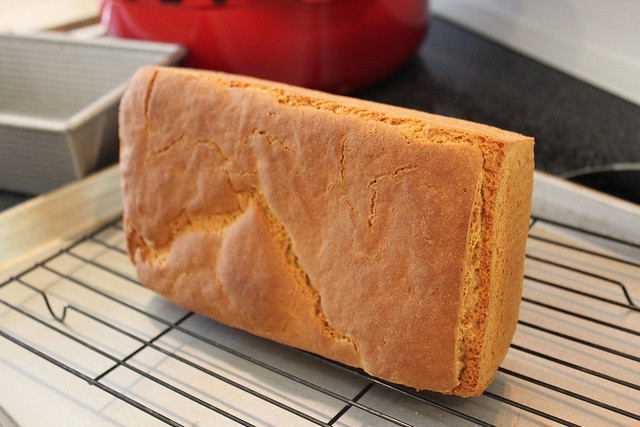 Let the loaf cool completely before slicing – Seriously, you will ruin the loaf if you don’t wait – I know this because I’ve been impatient many times – oopsie! ;)  Check out those beautiful slices! 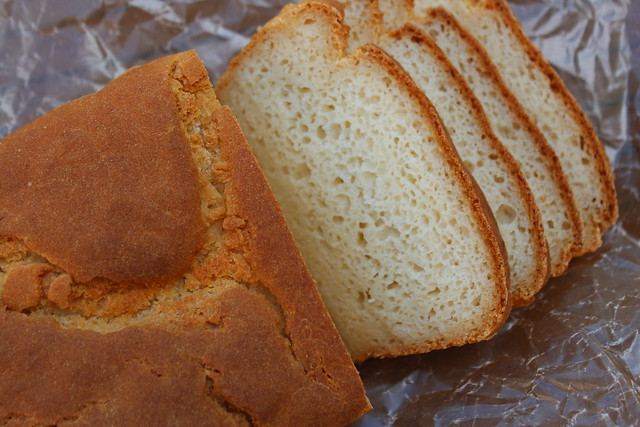 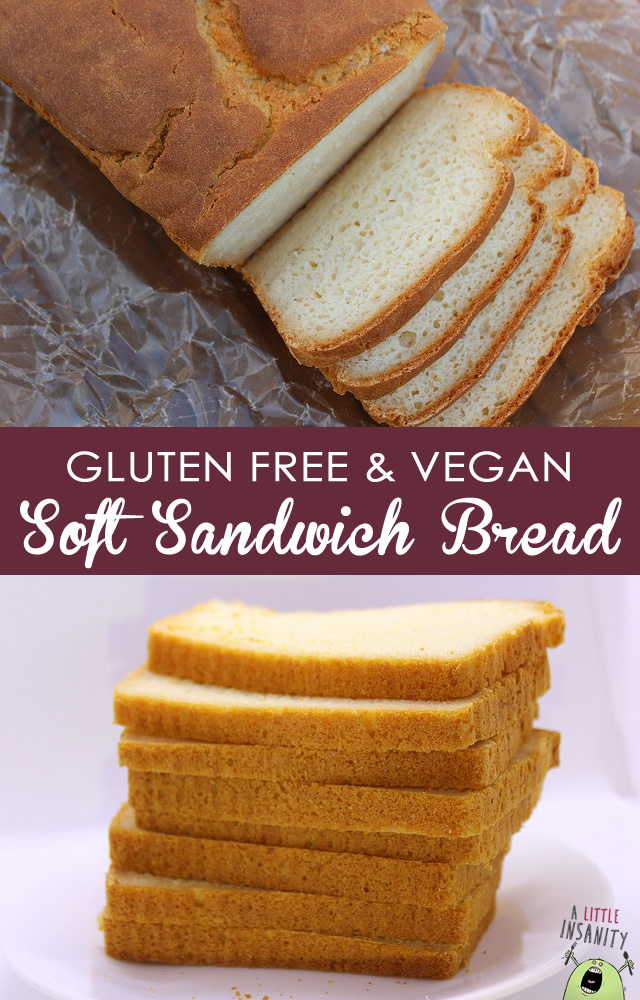